Missing Scene from Family of Blood

John Smith walked swiftly from the cottage. Past Martha, the maid who was sitting with the boy Timothy on a bench that was along the outside wall of the dwelling. She called out to him, using that name, that horrible name that wasn’t a name but more properly a title. He broke into a run, cradling the miserable watch in his hand as he tried to flee from the terrifying expectations of the maid.

He ran blindly, with a speed he did not know he had, not caring where he went, desperate to escape the demands of the people at the cottage. He pulled himself up short as he realized where he was running to. He was deep in the woods. Fallen twigs snapped softly under his feet as he shifted his weight, trying to understand what was happening to him. Ahead lay the space ship and a fate perhaps even worse than the one the watch held for him.

It was the watch that had caused him to choose this direction. He was sure of it. Just as he was sure it had caused him to stop before he blundered too close to the ship, asserting its purpose on his frightened mind. He stood there panting, trying to catch his breath as panic rose in his throat.

He felt it now, that wretched timepiece heavy in his hand, even heavier in his heart. He raised the hand that held it, turning it palm upward as he brought it level with his chest. The watch was glowing, the asymmetrical design of circles and lines becoming clear. It was writing, he suddenly realized, writing he should know and understand, but didn’t want to.

He breathed in the cool night air, smelled the scent of damp earth, felt the watch warm in his hand, as he stood there wide eyed, transfixed by the golden tendrils of energy that emanated from it, reaching out to him but unable to connect unless he willed it. With all the power the Timelord had, the choice was still his. The choice that Joan had said she would take from him if she could, but was unfortunately his alone.

The Timelord was pressing on his mind, alternately demanding and reassuring. Showing him there was no other way, he either merged with the Timelord, became the Doctor, that reckless unreal being, or not just he would die, but everyone, Joan, the boys in the school, the population of the entire world, and of worlds he’d never heard of. It told him he would be better, whole; that feeling of something missing would be gone.

That was the problem. He no longer felt like there was anything missing. His love for Joan had filled the empty place inside him and now he felt complete. There was no longer any room for all that this alien was supposed to be. All he wanted now was that simple life the Doctor had shown him, then cruelly took away, leaving him feeling like a starved child with his nose pressed up against the bakery window. Only allowed to look, to smell, but never to have. But it was a life he could have lived, if not for this horrible watch in front of him.

He jerked as the sound of bombing of the village reached his senses. The sound of people being killed as he stood there, warring with himself and the watch. He could wait no longer. He had seen in Joan’s eyes what he must do, even as she asked him what his choice would be. There was no other possible course of action.

He brought his other hand up and pressed the release mechanism for the cover of the watch, a physical action that seemed ridiculously easy when compared with its importance. He thought it would be a death but it was more horrible than that. As parts of the Doctor’s personality merged with his, he saw himself with new eyes.

He was disgusted that he would let a boy be beaten, when he could have stopped it with just a word. His breathing became ragged as he was filled with horror that he had roused children from their beds and placed their young bodies between him and an approaching enemy, having them fire weapons when he, the coward that he was, was unable to get off a single shot. He feared the judgment of the being he was becoming. He felt its moral courage and its sense of outrage at his actions.

Then there was a change, a shift in emotion, as he felt the longing of the Timelord to have the kind of love he’d had with Joan. The hope that it might remain, survive the transition.

He then became aware his body was changing, but it felt correct and good, as if it had been held artificially in a form that was not its own and was now released. Two hearts, it felt so right, so much better. And then he knew why the Timelord needed them as the crushing weight of responsibility settled on his shoulders. Only a being with two hearts could bear up under what the Doctor took on.

The Doctor was back now. John Smith was like a memory, a dream, a story never to be retold. He heard the sounds of the village being destroyed. His anger was cold as ice. People were dying needlessly. No second chances wasn’t working. It was essential he let those who would do harm know the consequences of their actions. He needed sign posts that would be clear to all. Come in friendship, or your fate will be worse than you can imagine.

The Family of Blood would serve that purpose. They would know neither the joy of life nor the peaceful oblivion of death. Which was as it should be, for they deserved neither. 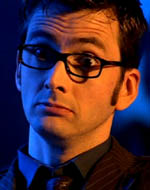 I like the solidifying change of tone at the end, once the transformation is complete. It goes from the soft, meandering, wrought, and, well, period thoughts of John Smith to the righteous, battle-scarred, jaded anger of the Doctor. Nicely composed!

Beatly wrote:I like the solidifying change of tone at the end, once the transformation is complete. It goes from the soft, meandering, wrought, and, well, period thoughts of John Smith to the righteous, battle-scarred, jaded anger of the Doctor. Nicely composed!

Thank you very much for you comments. It is good to know I got what I was aiming for. I'm glad you liked it.