While Richards himself continues to make an ass of himself by vigorously defending his brainchild against all criticism. Sometimes you just have to know when to step back and admit that you're the one who is wrong. Richard's has yet to learn this lesson it appears.

Didn't he also make a tit of himself with Spooks: Code Red? 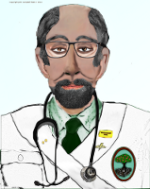 The Browncoat Cat wrote:Didn't he also make a tit of himself with Spooks: Code Red?

Yes he did. Proving beyond any reasonable doubt that the an is incapable of learning from his past mistakes.

Sid Seadevil wrote:Indeed. Oh and sad news for Browncoat Cat. It's almost certain that the final episode ends on a massive cliffhanger. One that's never going to be resolved now.

Episode #8, and the conclusion of the series. As Sid predicted, it ended on a massive cliff hanger that will now never be resolved. Which is a bit crap really. Not surprising considering that this badly paced and disjointed episode was written by Ben Richards.


So a series full of interesting ideas so badly handled by Ben Richards draws to a close, all I can say is that it was a wasted opportunity.

Outcasts, now mercy-killed after its first series - eight episodes that felt like sixteen - collapsed across the finishing line, had a lot going for it. The CGI was competent. The South African landscape was unfamiliar enough to most viewers, and spectacular enough in its own right, to stand in for an alien Earth-like world. The sets had moments and angles of promise. The lead actors were in their different ways good-looking. Some of them had been successful in other roles.

All that was wrong with it was the script. Clunky dialogue, kitchen-sink drama instead of plot, every character with a back-story like a tin can tied to a cat's tail. Every time something interesting threatened to happen, the kitchen sink got heaved at it. The extras were never seen doing anything that made you feel you were looking at a living community. They either walked briskly from place to place or gathered in front of the public telescreens whenever something had to be announced. The lead actors' talents were squandered on sub-EastEnders scenes with more Scottish accents. This was the BBC doing science fiction without the science fiction. Its ratings collapse and near-universal panning will probably convince the BBC not to risk doing SF again for a very long time.

One day later, relief: the second series of The Event has begun on C4! Already I'm rooting for the leader of the 'evil' faction of the aliens. At least, I am when I'm not wondering why, when the aliens crashed and were captured back in the late 1940s, the US government didn't follow the SOP for First Contact that worked so well at Roswell:

Kill and dissect. It's the only way to be sure.